I packed a lunch and arrived at the con by 7:00am or so. The line for single-day admissions was already about a quarter mile long and wrapped around the Convention Center to the Marina and along the Marriott.

I'd planned on going to Henry Selick and Neil Gaiman's Making-Of-Coraline panel, but once I got to the con, I realized that I hadn't alloted any time for the gargantuan exhibit hall, so instead, I used the morning to map out places-of-interest. (For me, that was usually artists' booths with interesting art books.)

Yeah, I spent the morning walking along the exhibit hall drawing circles on maps. 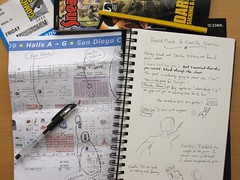 ComicCon '09 Map with doodles and Sketchbook

I saw a few artists, like Josh Howard at their tables, but I'd already gotten his signature on his trades (in his case), or they'd already be talking to somebody else, and I was on a timeline. I also saw a few stars like Edward James Olmos and Adam Baldwin.

I did my most fervent shopping for davidd in the morning.

I got in line for the CBDLF Mike Mignola artwork panel a half hour early, and that was plenty of time to get in. There was another line dangerously close that was very, very long. ::shudder:: It might have been Twilight-related or something. The Mike Mignola panel was great! He spoke about what he was doing as he drew a scene with HellBoy in it. He'd say things like, "I love knuckles with the fleshy parts moving around." He said that Frank Frazetta was an early big influence, but he went through phases, too, like when he wanted to draw like Vaughn Bode and Alex Niño. He said that since he's right handed, he tends to draw from the bottom left to the upper right, so that's why his scenes are always composed with the smoke rising to the upper right.

Sometimes he'll place a word balloon first, without anything to say in it, just because the balloon looks good there. Then he'll have to think of something for Hellboy to say in it.

I stayed in the room for the life-drawing of Amanda Palmer by Terry More, Camilla D'Errico and David Mack. That was awesome, too. Go check out this flickr set.

Camilla D'Errico did all her drawing with a cheap, blue Bic pen. David Mack did his with an ink brush. It was fascinating to compare and contrast their styles.

After that panel was over, I made a bee-line for the line for Hall H. I got in line for the Focus Features panel (with Tim Burton) about 20 minutes early. That wasn't nearly enough. I stayed in that line, outside, for the whole panel. I didn't get in until the next panel (which I also wanted to see), the Sony Pictures panel for Legion and District 9, with Peter Jackson.

After that it was back to the exhibit hall to revisit the places I made note of in the morning. I went from Hall H to the very opposite end of the exhibit hall. Phew, that place it big. After I'd had my fill, I headed back to the hotel, where my family was waiting for me.

It was another great con, but there's far too much to see and do for a one-day pass. Going alone was a mixed blessing. I missed being with friends, but I liked not making any compromises and doing exactly what I wanted. If I wanted to camp out at IDW or Slave Labor, I could. I think the one time I really paid the price for going alone was with regard to the line for Hall H. I shoulda had a friend waiting for the Focus panel for me.